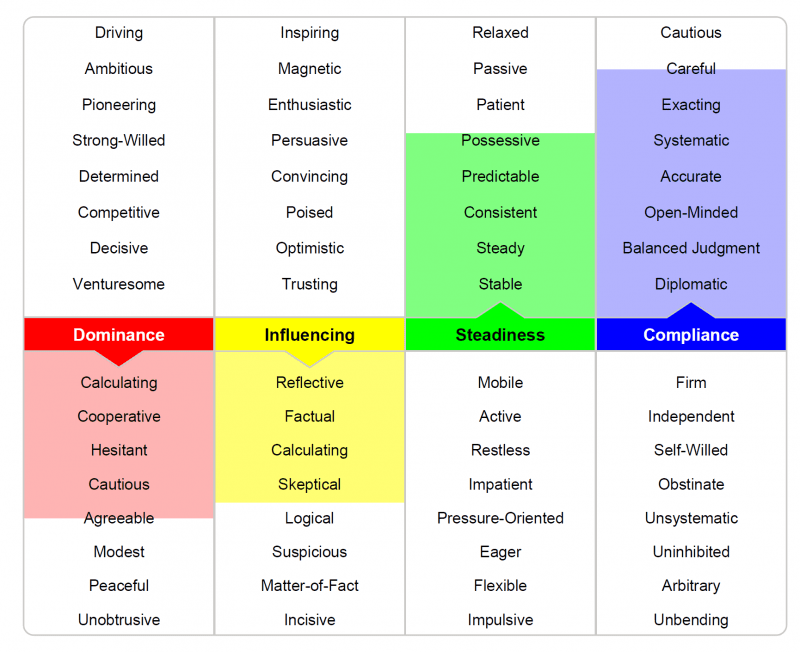 No matter the industry or size of the company, every group I work with says that communication is one of their ongoing frustrations. Most of those same people tend to assume their conflicts can be resolved by addressing what forms of communication are best (i.e. phone vs. email). But what if poor communication was actually a result of not understanding someone’s communication style? It’s not easy to communicate effectively with people whose behavioral styles differ from your own!

Here is a scenario that may sound familiar:  Think of a meeting you participated in recently.  Were there one or two people who did most of the talking?  Was there anyone who just sat back and observed? Did anyone come in prepared with an agenda and notes?  Was anyone hesitant to make a decision? These actions and reactions can be explained and understood when we learn about the recognized patterns of behavioral styles.

I’m talking about DISC and the four unique behavioral styles of Dominance, Influence, Steadiness and Compliance.  Each of us has some level of each one of these styles that impact the way we approach people and tasks.

We all have to address problems and challenges and Dominance refers to how we go about it.  On one end of the Dominance spectrum is the self-starting individual who is visionary, embraces challenges and places a high value on hitting goals. The person toward the other end of the spectrum can be more passive and reflective when dealing with conflict or challenges. Neither of these are right or wrong, good or bad. It’s just the way we approach problems and challenges.

Influence refers to how we interact with people and contacts. At one end of this spectrum is an individual who is people-oriented, loves to talk, has high trust and is optimistic. At the other end of the spectrum, however, is the person who prefers to be behind the scenes, work alone and may be more skeptical.  One tends to be more extroverted and one more introverted.

The S in DISC stands for Steadiness which refers to a person’s pace and consistency. The two ends of this spectrum look something like this: on one end is the person who is composed and can be resistant to change, wanting to focus on one task at a time. They are even-tempered, and good listeners who are friendly and sympathetic. The person on the opposite end can be impatient and have an impulsive nature. They love variety and prefer to take on multiple tasks.  Again, neither is right or wrong. And arguably, both are necessary.

Finally, the way we respond to procedures and constraints is referred to as Compliance.  At one end of the Compliance spectrum is the person who is a perfectionist. They maintain high standards and attention-to-detail to ensure the effectiveness of a project. They think very systematically and make calculated decisions based on data and facts rather than a gut feeling. At the other end of this spectrum is someone who can be firm, strong-willed and stubborn when offering opinions and advice. They see rules as guidelines to be followed, but they think outside the box and can just as easily break the rules or make them up as they go.

So let’s revisit that meeting. You may have someone with strong Dominance (D) behaviors running the meeting.  They don’t like to waste time and can be abrupt if others ask too many questions or go off topic.  This can make the person at the opposite end of the Dominance spectrum shut down and not participate. Or they may just agree with everything that’s being said so as not to make waves.  The person with the strong Influencing (I) behavior is likely going to be very personable and talkative, even interrupting others at times. They may use gestures to make their point and they are charismatic and optimistic. That behavior can make the opposite end of the spectrum crazy. This may be the person who questions everything and because of their more skeptical nature, may be seen as not supportive. The person with strong Steadiness (S) behavior doesn’t want to rush into anything.  They may ask for more time to think about an issue if pressed for a decision.  On the flip side, the person at the opposite end of the spectrum could make hasty decisions without getting all the facts.  And finally, the person with strong Compliance (C) tendencies is the one who makes sure that what is being discussed is in compliance with the rules and regulations governing them. The person at the other end may argue that the end justifies the means.

So as you can see, everyone in this meeting is seeing things from their own individual lens.  The benefit of knowing your own DISC style is being able to adapt how you communicate with those whose DISC styles are different.

One size does not fit all-unless there’s only one in the meeting!

About the Author: Leah Brown is a Talent Retention Strategist for Crescendo Strategies, a Louisville-based firm committed to reducing unnecessary employee turnover for clients across multiple industries. Leah is a contributing author to the recently released book, Staying Power: Why Your Employees Leave and How to Keep Them Longer, available on Amazon.